The inclusion of an article in this document does not give any indication of safety or operability. Anyone wishing to use any reaction or reagent must consult and follow their internal chemical safety and hazard procedures and local laws regarding handling chemicals

The construction of carbon–nitrogen bonds is one of the most widely used transformations in the pharmaceutical industry. Typically alkylation is achieved by reaction of an amine with an activated alkane – SN2 reaction, although with more active substrates, SN1 mechanisms or mixed mechanisms can operate.

Typically, functionalized alkanes can be prepared and isolated (halides, sulfonates), although in some cases they are prepared in situ. Mitsunobo alkylation is widely used on lab scale and has been used on large scale although separation of by-products can be an issue.

Typical green chemical strategy would be to replace Mitsunobu reactions on scale with activation by a halide or sulfonate. Mitsunobu reactions use azodicarboxylates that are toxic and have process safety hazards (explosive),  and by-products like Ph3PO can be difficult to purge. With a limited number of substrates, CDI may be a greener activating agent than R3P/R’-NCN-R’. However in the case below, the Mitsunobu route was preferred since the mesylate was determined to be a mutagen. 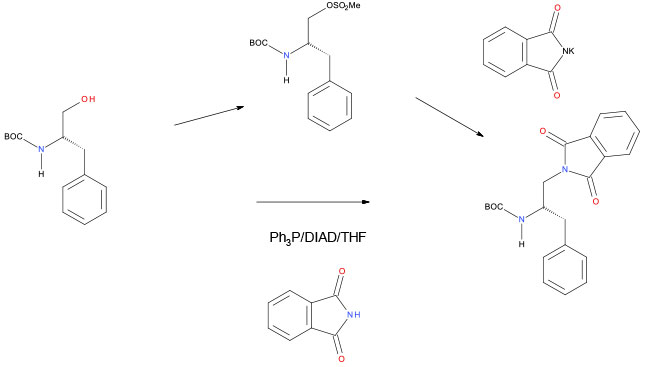 Hence if alkyl halides/sulfonates are to be used, the least reactive leaving group commensurate with desired reactivity should be selected, excess reagent avoided and the reaction placed as early in the synthetic sequence as feasible. Other electrophiles like epoxides and azyridines give functionalised amines, but also suffer from generating positive alerts for genotoxicity (Org. Process Res. Dev. 2010, 14, 960–976), so comments for alkyl halides and sulfonates also apply for these reagents.

Catalytic methods such as direct amination of alcohols, Trost allylic amination and direct C-H activation may be greener alternatives, but are currently limited to products with certain structural attributes. As with all precious metal catalysed processes issues such as catalyst loading, metal contamination in the API and waste streams need to be considered. The number of publications switching to cheaper base metals like Mo, Fe and Cu is increasing, especially in the areas of direct alcohol activation and allylic amination.