The nitro group is reduced by coordination next to absorbed H2 on the active face of a metal particle on a solid support. The mechanism is complex and goes via a number of intermediates – see scheme 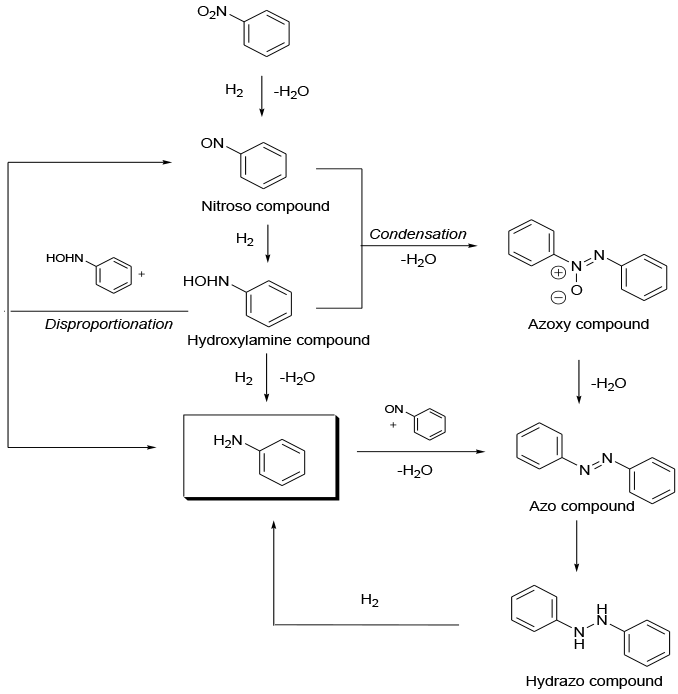 The most important intermediate in the catalytic hydrogenation of nitro-groups is the hydroxyamine species. Nitro compounds with electron-withdrawing substituents, e.g., sulfonamide or halogen can accumulate arylhydroxylamines in large amounts during the reaction. This is especially critical when the hydrogenation is carried out in batch reactors at low or medium temperatures.

Hydroxylamines are problematic in many respects. They are thermally unstable and can disproportionate with a strong exotherm, causing explosions. They are also known as potent carcinogens and therefore are hazardous in case of interrupted or incomplete hydrogenation. Hydroxylamine accumulation can cause poor product quality through condensation with the nitroso compound leading to formation of colored azo or azoxy products.

Ni is most commonly utilized as Raney Nickel - a very common catalyst for nitro reduction. It is cheaper than PMC and can be advantageous where chemo selectivity is an issue. Nickel catalysts can also give better performance when hydroxylamine accumulation is an issue.

The pyrophoric nature of most Raney –type catalysts is the major concern, although several non-pyrophoric formulations can be sourced. Raney Nickel can be used in closed loop reactors, with automatic recycling.

Key to success in many transformations is getting selectivity in multi-functionalized molecules. This can be achieved by screening for the most appropriate catalyst and support - and by the use of additives like MgO, P(OPh)3 or morpholine – see examples.