Synthesis of Carbon- Br bonds through activation of oxygen and then SN2 or SN1 displacement. Much more commonly utilized than simple bromide displacement of leaving groups.

Common reagents for deoxy bromination are SOBr2, PBr3,PBr5 POBr3 and HBr. Other less common reagents are Ph3PBr2and related P(V) reagents, which are usually made in situ from Ph3P and Br2 or CBr4 This is the bromo version of the Appel reaction.

Org. Lett., 2003, 5, 1167–1169 - Fluorous Solvent as a New Phase-Screen Medium between Reagents and Reactants in the Bromination and Chlorination of Alcohols - Use of SOBr2

"Thionyl Bromide". In Paquette, L. A. - Encyclopedia of Reagents for Organic Synthesis. 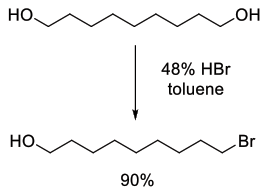