Lewis acid-catalyzed deprotection mirrors acid deprotection - coordination of the Lewis acid rather than protonation, followed by fragmentation to the amine, CO2 and a transient t-Bu+ cation which can form isobutylene or  react with any nucleophilic species present. Isobutylene is off-gassed, or under acidic conditions can oligomerise. Typically the Lewis acid needs to be used in greater than stoichiometric amounts. 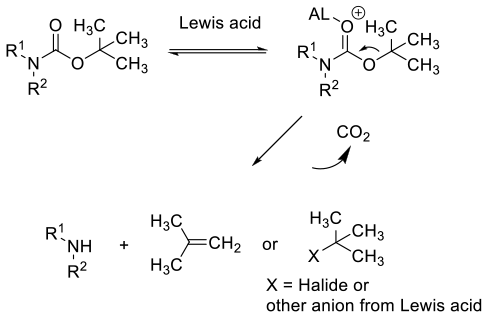 While many different Lewis acids have been reported to deprotect BOC amines, they are seldom used on scale, with acids being the reagents of choice. There may be some advantage when multiple acid sensitive groups are present in the substrate. It should be borne in mind that under protic conditions – water/alcohols or with adventitious  water, many Lewis acids and other reagents (Me3SiCl) claimed to remove BOC groups will hydrolyse to give protic acids, which are the active catalyst in the deprotection. Another limitation is that many weaker Lewis acids under mild conditions will only remove BOC groups from imide type compounds – N(SO2R)BOC.