Delivery of a hydride from a BH reagent to reduce the imine or iminium intermediate. Generally not all hydrides transfer from the boron hydride source. Intermediate borates are hydrolysed to amines on work up.

NaBH4 is the cheapest and most readily available reagent, but due to instability in protic solvents, especially at lower pH, large excesses may be required. The reactivity of NaBH4 may also result in an unacceptable degree of background reduction of the ketone or aldehyde electrophile if the imine is not preformed. The most commonly used borates are NaH3BCN, and NaHB(OAc)3. The addition of electron–withdrawing groups making the reagents more stable to protic solvents and lower pH in which the imime may exist as the more reactive iminium ion. Borane:amine complexes, BH3:NR3 are occasionally employed, and silanes are sometimes used for the reduction of preformed imines.

Org. Process Res. Dev., 2008, 12, 823–830 A Reviewon the Use of Sodium Triacetoxyborohydride in the Reductive Amination of Ketones and Aldehydes

Tetrahedron, 2004, 60, 7899–7906 One-Pot Reductive Amination of Aldehydes and Ketones with α-Picoline Borane in Methanol, in Water, and in Neat Conditions 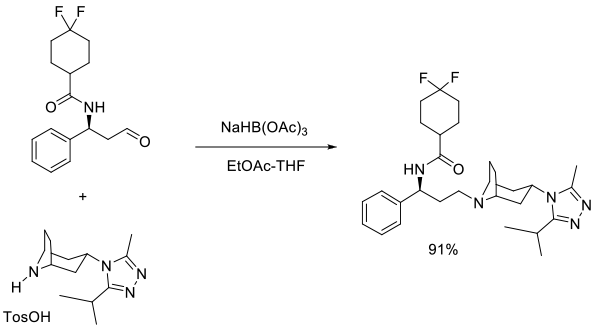