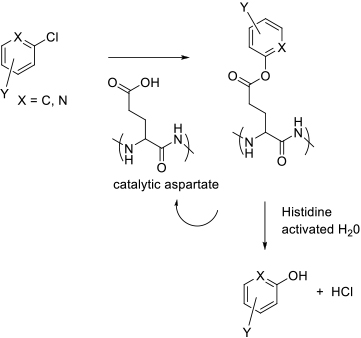 The mechanisms of enzymes that convert aryl and heteroaryl halides to phenols are not all fully categorized, but some do seem to catalyse true SNAr type reactions. These appear to have mechanisms similar to haloalkane dehalogenases (catalytic triad Asp-His-(Asp/Glu)), or are metalloproteases that use water activated by coordination to a metal centre as the nucleophile.

Whilst not an obvious reaction for bio-catalysis, a number of enzymes have been reported to give SNAr like conversions with aromatic and heteroaromatic halides. To date, only water has been used as the nucleophile, but rapid developments in evolving enzymes for promiscuous catalysis could facilitate use of other solvents.