Some SNAr reactions can be catalysed with metals to improve rate or to use otherwise poorly reactive arenes. Metal complexation either via π complexation to the aromatic or σ complexation to the lone pair of an heteroaromatic. This withdraws electron density and activates toward SNAr reactions. This mode of catalysis is quite distinct from the Buchwald-Hartwig amination since there is no oxidative insertion into the carbon–halogen bond. 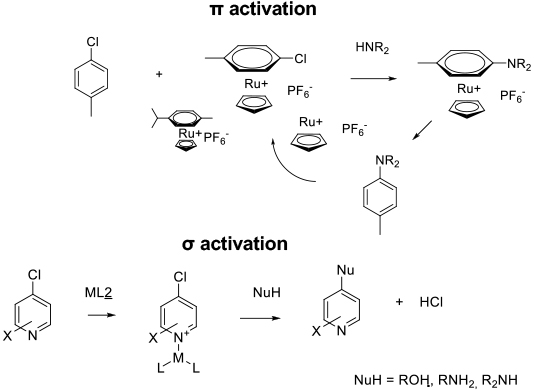 It has been known for some time that forming stoichiometric metal π complexes with FeCp+, RuCp+ or Cr(CO)3 units provides a degree of activation towards SNAr reactions equivalent to one or two NO2 groups (Current organic chemistry 1999,3, 4. While this type of activation may prove useful for small scale synthesis, the use of stoichiometric metals at large scale is unattractive. A number of examples have appeared using catalytic metal complexes – usually Ru species for π activation and Lewis acidic metals like Li, Mg, Al, Zn or Zr for σ complexation of nitrogen heterocycles. Simple protic acids can catalyse SNAr reactions by protonation of heterocycles. In the case of π complexation, this mode of catalysis has suffered from long reaction times and poor TON since the product arene is more electron–donating and hence a better ligand than the starting halo arene, however, greater understanding of the reaction mechanism is leading to more active systems. In some cases, metal catalysis has been employed to isomerise/oxidise ring substituents in situ to provide a greater degree of activation for SNAr reaction.

Nucleophilic catalysts like DBU have also been reported in some cases to catalyse SNAr reactions and influence selectivity when multiple leaving groups are present.