The SNAr reaction involves nucleophilic displacement of a leaving group by a nucleophile –usually N, O or S based, but occasionally C-based nucleophiles are encountered. Typically the arene is activated to substitution by the presence of electron-withdrawing groups, or is an electron- deficient heteroarene. The nucleophile attacks the ipso carbon to form an intermediate anionic intermediate, a Meisenheimer complex. Loss of an acid or  salt then generates the product.

Typically aryl fluorides and heteroaryl chlorides are the substrates of choice for the SNAr reaction, although other leaving groups like bromide, sulfonate or nitrate are sometimes used. The reaction is typically performed by reaction of the aryl/heteroaryl halide with the nucleophile in a solvent in the presence of a base. If the nucleophile is a cheap and readily available base like an amine or alkoxide, this is often used in excess. If the nucleophile is weak, or for particularly unreactive aryl halides, prior deprotonation of the nucleophilic partner with a strong base is used. Bases are typically tert-amines like Et3N or Hünig's base, inorganics like Na2CO3, K2CO3, KOH, NaOH, Cs2CO3, stronger bases like NaH, Kt-BuO, LHMDS etc. The use of NaH/KH with dipolar aprotic solvents is not recommended on safety grounds – see solvents section for more details.

Typical dipolar aprotic solvents used for SNAr chemistry are DMF, DMAC, NMP. These have been identified as being reprotoxic (H360) and should be replaced if possible. Less widely utilised dipolar aprotic solvents like N-ethylpyrrolidinone (NEP), tetramethyl urea (TMU), 1,3-Dimethyl-3,4,5,6-tetrahydro-2-pyrimidinone (DMPU) and 1,3-Dimethyl-2-imidazolidinone (DMI) have been put forward as replacements for DMF/NMP/DMAC, but recent data indicates that these solvents are also reprotoxic.

Some cyclic amides like N-Butylpyrrolidinone (NBP) have been put forward as non-reprotoxic alternatives for a range of chemical transformations. Available data suggests that higher molecular weight, more lipophilic cyclic amides like NBP do not show the adverse reprotoxic effects shown by the lower, hydrophilic dipolar aprotic solvents.

MeCN has a good toxicity profile, but is expensive and has suffered from supply chain issues in the past. 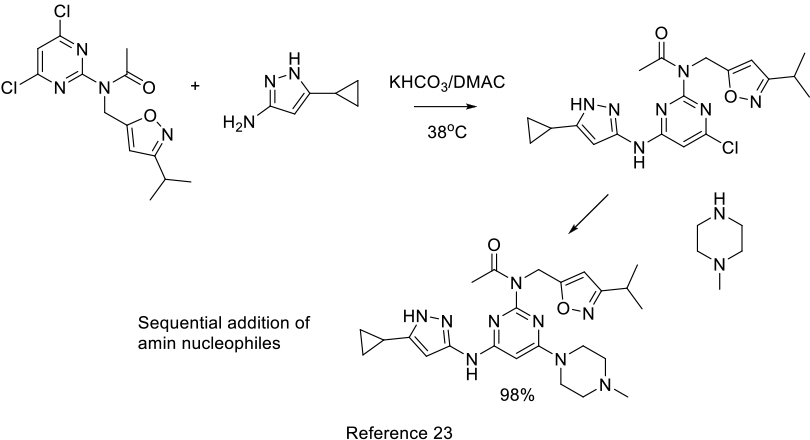