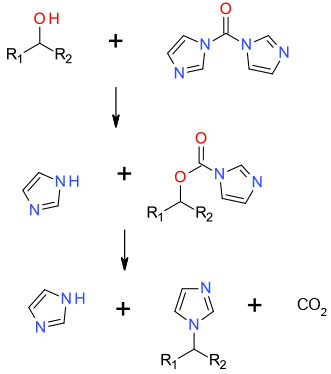 For a limited range of alcohols and its thio-analogue, has been shown to convert alcohols directly to N-alkylated imidazoles. If certain structural requirements are met, chiral integrity is maintained. Triazole versions of CDI also undergo this transformation.  For amino alcohols where cyclization is possible, CDI has been reported as a greener alternative to Mitsunobu or Appel reagents for ring formation.

J. Org. Chem. 1997, 62, 7319-7323 Imidazole Transfer from 1,1-Carbonyldimidazole and 1,1¢-(Thiocarbonyl)diimidazole to Alcohols. A New Protocol for the Conversion of Alcohols to Alkylheterocycles