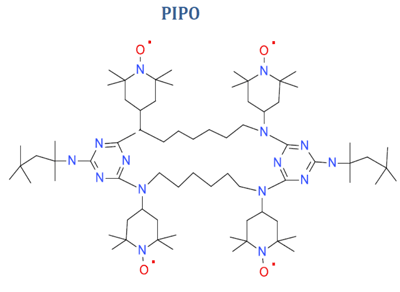 These can be added as the nitroxide radical form – PIPO, or as the secondary amine from which the active catalyst is generated via oxidation in situ – these are the Chimassorb 966-type materials sold as (BASF).

A number of polymeric TEMPO-based nitroxide radical catalysts exist. These often show high activity and can be easier to remove and re-use than free TEMPO. PIPO is a polymer immobilised TEMPO that is produced from a cheap solid support. The reagent was published recently by Roger Sheldon, there is very limited scale-up information with this system but Sheldon reports there are three advantages over TEMPO/Bleach

(i) NaBr/KBr are not required

(iii) The catalyst can be filtered off and reused.

Green note – There are a wide range of solid supported catalysts. The options for easier work-up and reuse potentially make these green options, however considerations should be given to their preparation and lifespan (number of reuses before depletion of results) to make an informed decision if its a better option than the standalone/homogeneous reagents.