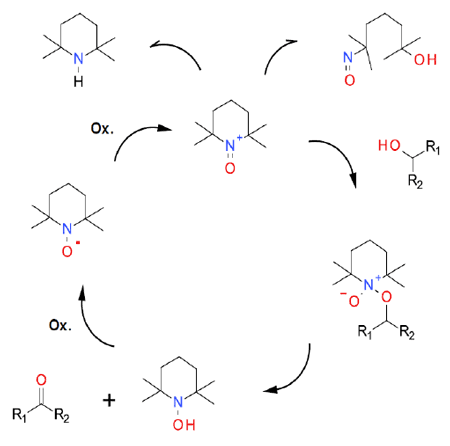 Several stable oxonium salts have been reported to be efficient oxidants in the synthesis of aldehydes and ketones from alcohols. These show very poor atom economy, but can be made catalytic with the active oxonium ion generated in situ with a terminal oxidant.

TEMPO and related stabilized nitroxyl radicals have found wide application as catalysts in green oxidation technology for the synthesis of aldehydes and ketones. The actual oxidant, the oxonium ion, can be used in stoichiometric amounts, but this adds cost and poor atom economy. Most are used catalytically with the active oxidant generated in situ and with the process driven by the addition of a terminal oxidant. Achieving very low catalyst loadings can be hindered by side reactions that destroy the oxidized form of the catalyst. Many of the early examples of TEMPO–catalysed oxidations were run in chlorinated solvents. More recent work has shown that greener solvents can be used.

As stoichiometric use is generally not progressed, examples will be provided with individual oxidants in following slides.

Generally low impact when used catalytically, the major concerns arise from the choice of co-oxidant. Air and NaOCl give good atom economy, less so with hypervalent iodine oxidants which produce iodobenzene as a co-product. Nitroxyl radicals like TEMPO and the hydroxylamine intermediates in the oxidation cycle give positive structural alerts as potential genotoxic impurities (PGI).

A large number of TEMPO variants exist based on the 2, 2, 6, 6,-tetramethylpiperidine motif. In recent years, a number of structurally diverse nitroxide radical oxidation catalysts have appeared. A drawback is lack of commercial availability, although more are becoming commercial or readily prepared. A key feature is that these catalysts often show positive rate enhancements compared to TEMPO – often several orders of magnitude. The mechanism of action is identical, requiring a terminal oxidant like NaOCl to drive the catalytic cycle.