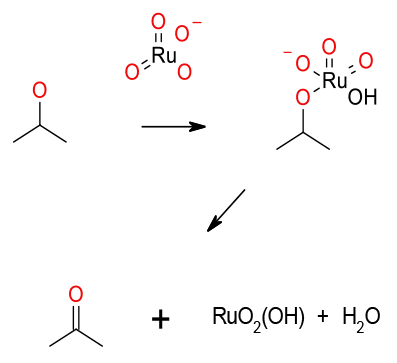 TPAP provides a source of Ru(VII) soluble in a range of organic solvents. Alcohol oxidation is via a Ru complex generating Ru-(V) and the product. The catalyst is regenerated using an added terminal oxidant, usually N-methyl morpholine-N-oxide.

This is a mild and more easily controlled version of RuO4. The organic salt is soluble in a range of organic solvents. Often used to oxidise primary alcohols to aldehydes, the complex is used catalytically and driven by the addition of a terminal oxidant. The by-product of water needs to be removed to minimize over-oxidation to the acid. The original oxidant, morpholine N-oxide (NMO), gives rise to poor atom economy. Later variants have attempted to address this by using air instead as the co-oxidant.