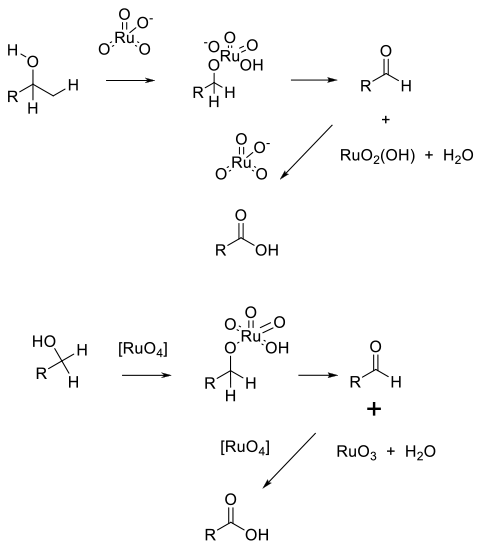 TPAP ( nPr4NRuO4) provides a source of Ru (VII) soluble in a range of organic solvents. Alcohol oxidation takes place via an Ru complex that generates Ru (V) and the product. The catalyst is regenerated using an added terminal oxidant.

Ru (III) salts are oxidized in situ by a terminal oxidant, which is the active species. Oxidation takes place via the Ru ester, and the reduced Ru (VI) species is recycled back to RuO4 by the oxidant. In both cases, the aldehyde is oxidized by an identical mechanism via the hydrate.

Catalytic RuCl3 and TPAP prove milder, more easily controlled, and greener versions of stoichiometric RuO4 oxidation. TPAP gives solubility in a range of organic solvents. TPAP is used catalytically and driven by the addition of a terminal oxidant. The original oxidant, morpholine N-oxide (NMO), gives rise to poor atom economy. Later variants have attempted to address this by using air instead as the co-oxidant. RuCl3 typically uses terminal oxidants like NaIO4, NaOCl, H2O2 to regenerate RuO4. Generally, Ruthenium salts are low impact with low catalytic loadings. As with all heavy metals, the contamination of the environment needs to be avoided and levels in the final API need to be controlled. Other risks depend on the co-oxidant used.